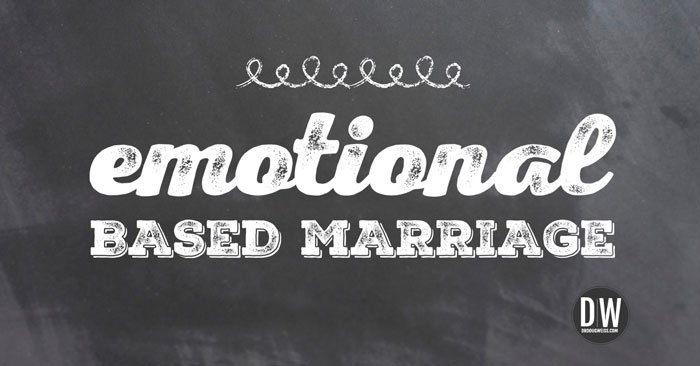 Something I have repeatedly seen sabotage a couple’s intimacy and I call it the “emotion-based marriage.” These marriages are characterized by chaos, lack of follow through and multiple inconsistencies in several areas of the marriage including the disciplines in raising children.

There are two types of an emotion-based marriage. The first is what I call the “benign” form.  The second form is “malignant” yet treatable. I would encourage you to walk through this section even if it doesn’t apply to you because most will know marriages that function this way and it can help to better understand why.

There is a couple I know for several years that lives in another state. They have two children and are very active in several areas in the church. Their house is always in total chaos and there are clothes in piles everywhere. They are constantly kept so busy that regular fellowship with them is difficult. They have no time to date and their systems of intimacy such as prayer, sharing feelings, dating and finances are always in a state of flux.  They never really seem to get momentum in their relationship but always are going around the same cycle of chaos.

This is a benign form of an emotional-based system. In this system no one is really intentionally trying to be difficult nor does one mean the other any harm. They simply can’t seem to “get it together”.

A couple like this will try therapy but only continues doing their homework for a short period of time. When asked about why they didn’t follow through with it they rarely can come up with any tangible reason.

The whole notion of practiced consistency or principle-based thinking totally eludes them. Their decisions are made emotionally as their schedule changes constantly simply because of a desire to change and do something else. At that point they are unable to remember previous commitments and totally miss events they had planned.

They mean no one harm and often couples like this are pleasant and fun to be with at least when things are going well with them. There is no structure to their lives.

Progress is slow in a marriage with the benign form of emotional-base system. Trying to get a commitment from them to simply to do something together is difficult. When they get into a system for a few weeks, they feel closer than ever but they eventually stop and then their relationship deteriorates again.

The reason for the marital deterioration is that this couple’s emotions dominate the decision making process. If they feel like doing something they do and if they don’t then they just don’t do it, period.

The 60’s culture has raised a generation that has bought into in a lifestyle that practices, “if it feels good do it”. The concept of restraint, principles and accountability are not in any of the decision making process.

Intimacy is relational wealth that accumulates over a lifetime of invested consistent behavior. Intimacy like wealth doesn’t just happen. It is painstakingly planned and worked for and achieved along the way while two hearts are consistently being open and available to each other.

A couple within an emotional-based system will honestly find it difficult to change. Even the benign structure meets disciplined changes with great resistance. The chaos within this system gives the couple a great distraction from the lack of structure in the relationship.

Crisis’s appear from out of nowhere such as where one or both of the partner’s needs are not being met and stress appears in the marriage, plans for the future are avoided, a flat tire just happens…and the cycle of the emotion-based marriage starts over once again.

The malignant form of the emotional-based system is willful. In this marriage, not only are the husband and/or wife making their decisions based upon their emotions but they also refuse instruction, information, or connection from anyone.

This type of selfishness at the cost of others becomes toxic. The intimacy within the relationship is inconsistent and even volatile. Anger or silence is used to control the spouse and other family members as well. You know you’re in a marriage like this when the major goal of the family is to keep this spouse happy.

The malignant form of an emotional-based marriage can sometimes be a result of several undiagnosed forms of emotional disorders. Sometimes addictions are present such as an addiction to work, alcohol, drugs, or sex. If an addiction is causing this system, medical literature supports that there is a lack of emotional maturity in an addict of any kind. For these issues to be resolved professional help may need to be involved.

Other times a spouse may have a mood disorder called Bipolar. This disorder seems to show up where the husband or wife has days of happy, motivated, clear thinking, and is actually fun to be around.

Suddenly out of the blue comes one to three days of down, moody, and irritable behavior where nobody in the family can do anything right and a “why bother” attitude creeps into the atmosphere of the home. After a couple of days they again go back to the cycle of emotions changing again. This can keep a marriage in a toxic form of an emotional-based system.

If it is the malignant form and there are no addictions present nor mood disorders it may be simply a heart attitude that suggests, “I do what I want and if you don’t like it leave”. Often if the husband or wife state their needs for intimacy this person states that you are needy or weak. It feels as if they can’t or won’t let you in.

If you’re reading this section and it feel like you are in a malignant or toxic emotional-based system, you probably will need further professional help to get you to the other side of intimacy with your spouse. Real problems need to be addressed.

If you find yourself in this situation you would definitely benefit by doing the exercises mentioned in the anger chapter of this guide. Do as many of the structured exercises in this guide as you can.  If you do feel that you need professional help ask your pastor for a referral.

To learn more about an emotional based marriage purchase the book. While you are reading this book, it if any time questions come up we are here to answer any questions. Feel free to email us at heart2heart@xc.org or give us a call at 719.278.3708.

Who Should I Marry? Being Different Vs Similar